After 6 years of hopes and plans and fails and miracles we can now say it without thinking twice: ALL HAPPY DAYS ARE RESCUE DAYS! Today 30 beauties of Hope went out of the shelter to start a new life in Germany so I am here all smiley trying to write to you the history of our anniversary booklet with postcards .

It is not about making the postcards fashionable once again, it is not about getting rich from postcard sales, it is just about sharing the beauty of our rescue activity with the ones that make it possible daily,  it is about rewarding the beautiful donors of our orga with a small symbolic gift from our dogs, it is about transforming their wishes in reality further trough your help! That is why we ask every single donor that will send a donation as anniversary gift to claim his very own anniversary booklet, the gift of our dogs for their care and help. 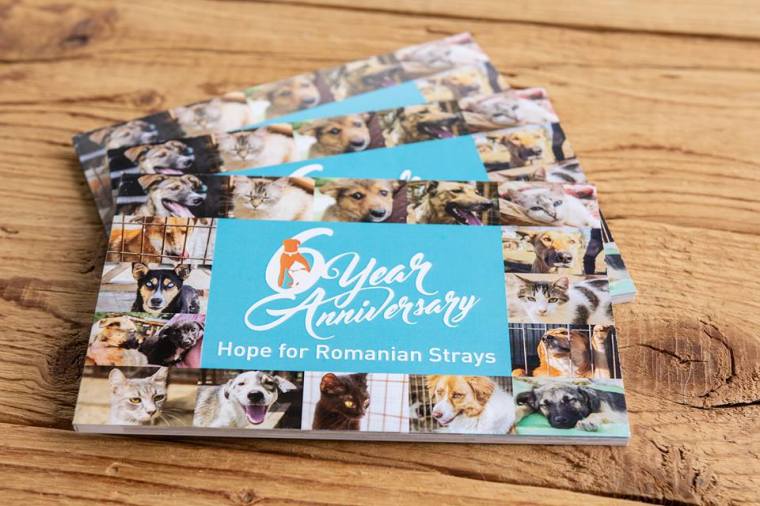 As part of our 6th anniversary event we had to choose carefully which beauties from the shelter we promote trough the very special booklet with postcards , not because we didn’t had plenty of great dogs/cats to choose from but because we wanted to use this opportunity for bringing into the attention of our donors/adopters few special cases of dogs that didn’t found their way to exit the shelter so far for some reason . So this is how we choosed 5 cats from Sanctuary of Hope, 5 dogs from Bucov Shelter and 5 dogs from Sanctuary of Hope, resulting in the end 15 great postcards for our donors to enjoy as part of our anniversary celebration! This is how the booklet of postcards came to the light of print after many weeks of hard work and worries and plans, since we all wanted to make it simple and to promote dogs/cats for which you can follow with us together the evolution in shelter and outside of it, with the big big hope that they will all stay strong and alive until their rescue day will come!

Two weeks ago when the booklets were out of print and we started distribution for making them available in Germany, Austria, Switzerland , Uk and Finland ( plus any other country where beautiful donors will want them ), we had basically no idea that this Happy Rescue Day will bring also the happy miracle of rescue for two of our postcard beauties, Mahlia & Izayo  !!!! For me this means life, the miracle of rescue means life for the poor souls that we struggle to keep alive in shelter for having their own chance to happiness one day!

Mahlia is such a smiley face, she had to live in shelter kennels for so many months, together with many beauties captured out of the street, she was vaccinated and castrated thanks to the amazing support of beautiful donors and then her long period of waiting the rescue day has started. After almost one year spent in public shelter, her big rescue day has come in same week with our anniversary event, our postcard with Mahlia and her dream came out to the light just in time for being able to enjoy all together the great miracle of her rescue .

Mahlia and her very own anniversary wish will become reality now

Damn, I am so used by now with all facebook emoticons that my text seems long and annoying without smiley faces, hihi! But this is not so important since the real fact is that today is Happy Rescue Day for so many dogs in need, between them being also Mahlia & Izayo, for whom the anniversary dreams will finally become reality!

Izayo was just a tiny baby when he became subject of discussion for our postcard theme, we didn’t knew how his future will be but we wanted to point out the beautiful puppies that have no big chances of survival after being dumped in overcrowded shelters…All pictures were made in June by Rebecca , volunteer and now also part of Hope for Romanian Strays team, the creator of every single postcard that you will see in the beautiful booklet. The booklets were prepaired as graphic in Germany, we printed them in Romania and this week they became part of our anniversary event launched from Austria by Gertie, the real power engine behind all our succesfull fundraisers.

All in all, being such a happy day for me as a rescuer and for my lucky rescued souls , I can tell you that the joy is doubled by those little postcards that might seen insignifiant to most people in this internet era , not because they are ours but because they were created with love to help us promote better our work and beauties , because every single postcard has a full story behind, because every single soul from this postcards needs your help to be saved out of here to fulfill the dream of their life! 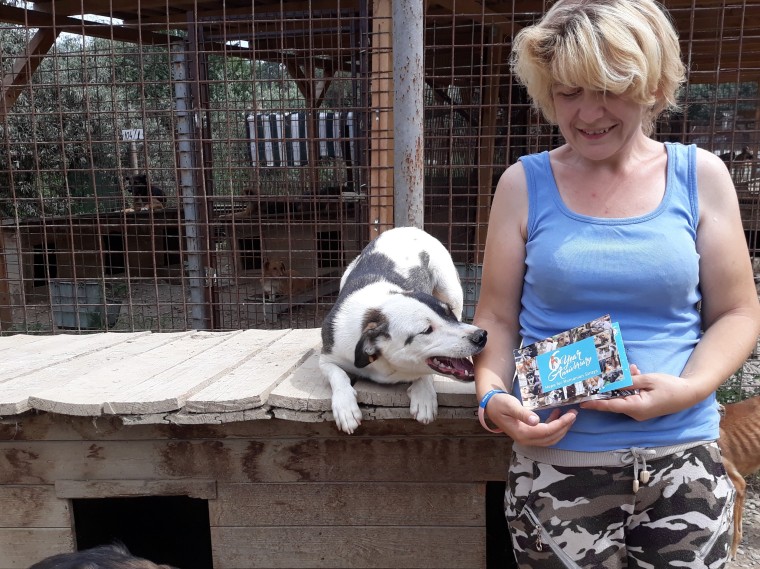 With love and smiles,

Esha has a dream too, waiting for so long to become reality

← 6 Years of Hope for Romanian Strays!
Stumpy and the Magic Word! →