Hello – I’m Lily and I was born on the streets in Romania and had a pretty rough start to life.  I was a tinee winee puppy when I broke my pelvis and then these really nasty big dogs attacked me and bit me!  That really really hurt and I cried a lot.  I was so miserable and didn’t know why this was all happening to me – I was only a little puppy abandoned on the streets and all I wanted was to play and be happy.

Then a nice man found me and picked me up and took me to my first foster mum and rescuer Aniela.  She was so lovely to me and took me straight to a vet.  That was a bit scary I have to say – all a bit different but I was soon on the mend thanks to the meds they gave me.  I was not the biggest fan of the injections I have to say but Aniela told me it would make me get better so I was very brave! 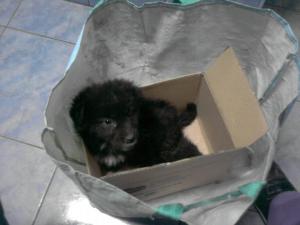 Me when I was first rescued

As my broken bones started to mend I was able to wobble around a bit – and Auntie Aniela then started looking for a forever home for me.  She shared my photos and stories on Facebook and through friends.  I was so worried – what if no one would want to give me a home?  I was only a little puppy and wouldn’t need much space but I know there are so many other doggies looking for a home – and who would want a damaged little puppy like me?  Oh I did worry so but Auntie Aniela didn’t give up hope and told me that she would find a home for me.

And then . . . she did!!  OMD!!!  I was sooo excited!  I was also a bit nervous – Auntie Aniela told me that I was going to have to go on a long journey to get to my new forever home.  What would my new family be like?  And would the journey be scary?  I had grown really fond of Auntie Aniela and she loved me very much – I would be sad to leave her.  I did ask if she could come with too but she couldn’t – and she told me I would have to be a really brave little girl.  I told her that I would – I am only very little and young and still very wobbly on my feet but I would be brave – I promised!

Then she told me that I would not be travelling alone! Buddy, another doggie rescued from the streets, had also finally been found a forever home too.  We would both be leaving for our new forever homes together.  Auntie Aniela told me that even when Buddy went his separate way (his new mum was in Austria and I had to go somewhere called Switzerland) I would still not be alone and that there was a whole group of people who would travel with me and look after me on the journey.

Here’s me and Buddy getting ready for the journey – it was very early this morning!

And then the big day came.  OMD was I nervous!  It was a really early start and me and Buddy were both a little tired I have to say – but we were also so excited!  Finally we were going to go to forever homes.  We got a little walk and then we had to get into our travel boxes and then we set off.   It was a bit scary but as promised I was very brave.  Buddy left me to go on to his new home but I still had a bit further to go.  My first stop was going to be Stuttgart where I would be staying the night with another Auntie and her doggies.  I arrived so late – it was such a long long day and was so tired so I got a little scared when the big doggies wanted to play.  So Auntie put them in another room and I got a bit of piece and quiet . . . and I  got to sleep with Auntie’s daughter in her bedroom!  That was such a treat I must say : )

I got on well with one of the dogs who wasn’t quite so bouncy and scary, and she came with me the next day to keep me company on the way to the train station.  I felt a bit braver with the big Lola protecting me I have to admit.  We got to the station and there I met the next Auntie who was going to take me on the next step of my journey – on the train.  Auntie Alexandra had come by train from Switzerland to pick me up and she bought me some really yummy sausages!  Oh I loved those – they were yummy!  Lola got a bit too – and then Auntie Alexandra gave Lola a chewy bone but when Lola wasn’t looking I had a little nibble too.

Then it was time to get on the train.  I have to say I was so scared and already missed my new friend Lola.  Auntie Alexandra put a really compfy blanket down for me and let me cuddle up with her on the seat.  But I am sorry to say I was so scared and sad that I did have a little cry.  Auntie Alexandra then gave me some more sausage and I cheered up a bit. 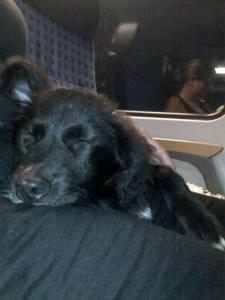 Me snoozing on Auntie Alexandra’s lap on the train 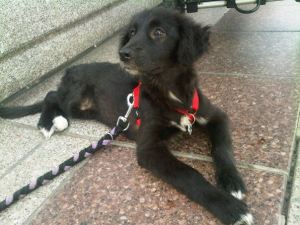 The journey was actually then not too scary.  We had to change trains half way but I got a few extra cuddles and there were some interesting sniffs too.  We finally got into Basel and Auntie Alexandra carried me all the way outside (I was really a bit tired by now!).  We waited and then all of sudden I saw the biggest doggy I have ever seen!  I was a bit worried and when he came to have a sniff at me I gave him a little growl just to show him that even if I was small I was a tough little girl!

And this big chap it turns out is  my new brother!!  And the lovely people with him were my new family!  OMD  I was really a little overwhelmed – I finally had my very own forever home and family!!!  Auntie Alexandra was very sad to see me go but said she was so happy that I had a new home – so I gave her a little good buy kiss and then left with my new mum.

And now my new adventures will begin . . . 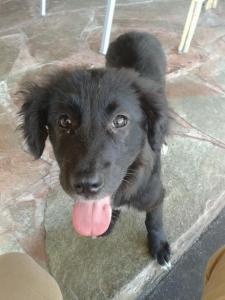 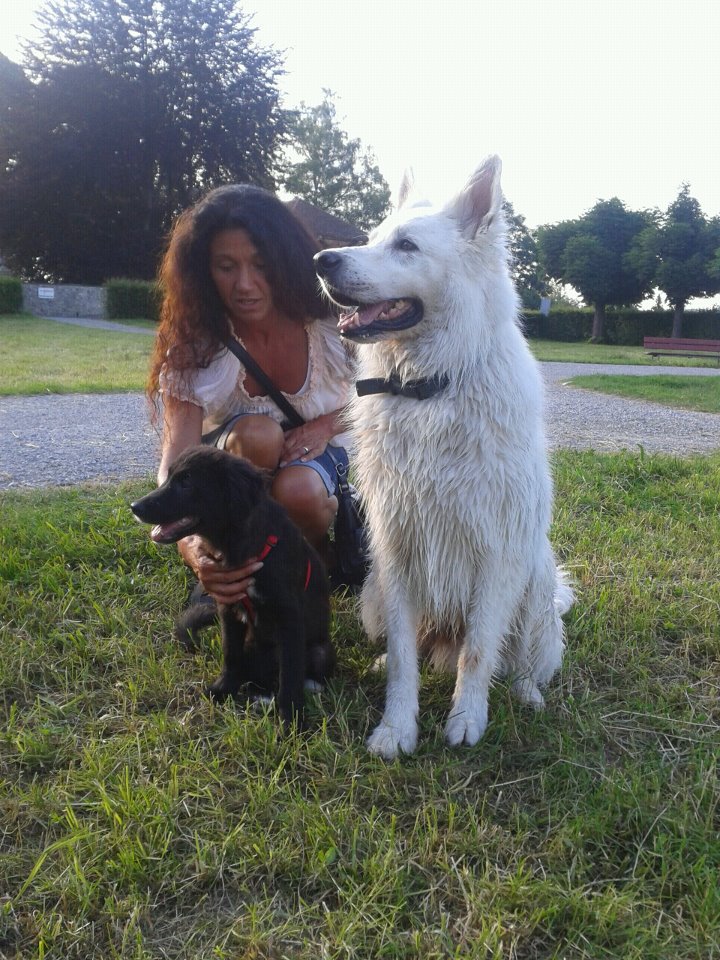 Me and my new family – aren’t they big next to little me!

Me in my new forever home

← Fabulous news – Lily’s nearly there!
ADOPTED by me! Betty – Under veterinary care after 3 years since she was hit by car →